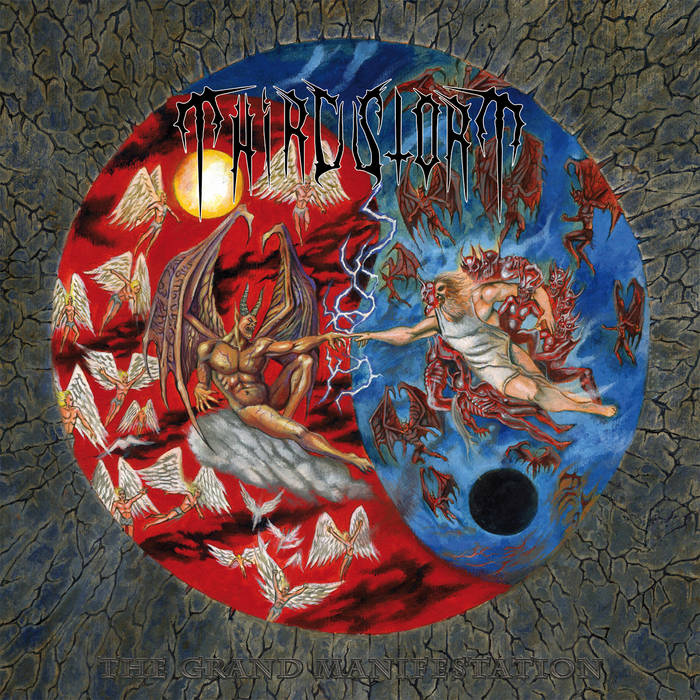 LeastSuccessfulHumanCannonball I keep coming back to this album, a unique combination of 'blistering' and 'hypnotic' black/death metal, which is somehow captured by the cover art... If you like the hypnotic, also check out their Taritiya Me EP. Favorite track: Through the Eyes of the Omnipresent.

Matthew Toye Third Storm reminds me of Dissection. Like their Swedish forefathers, the band is highly musical and write some straight up ice cold melodies. The acoustic passages are well placed and sound great too. Favorite track: Through the Eyes of the Omnipresent.

In the past, not many knew of the Swedish black/death metal band Third Storm, still they managed to keep this beast going from 1986 - 1988. Other than founding member Heval Bozarslan, the lineup was completely different back then. Four 14-15 year-old crazy metalheads who worshiped extreme metal of that time and wanted to make their own noise in their home town Uppsala. Perhaps they were not very talented musicians back then, not strange since they were only kids, but they did a dozen shows and a couple of rehearsal demos before splitting up way too soon. Years passed, each member went their own way and the band dwelled in obscurity till 2014 when two original members, Heval and guitarist Jimmy Eriksson awakened this beast once again. Two new members joined, David Eriksson (guitar) and Daniel Ekeroth (bass), and session drummer Johan Ericson helped the band to record their EP Taritiya Me which saw the light of day in the fall of 2015 on Dark Descent Records. This line-up showed a new face of Third Storm. While the spirit of the 80s was there, now they were better musicians with better song-writing. The band proved with Taritiya Me that they can be reckoned with and indeed that 26 minutes EP blew many doubtful minds away. Soon after the EP, Jimmy had to leave for various reasons so Hasse Hansson joined as the second axeman. The band also found their full-time drummer Alvaro Svanerö. Both Hasse's song writing skills and lead wizardry combined with Alvaro's breathtaking drumming raised the band to a new level of excellency as clearly shown on their debut full-length album The Grand Manifestation which is definitely one of the finest albums of this year. According to Bozarslan, this is the Third Storm was supposed to sound like 30 years ago.

With an album cover that would make Michelangelo turn in his grave and God himself throw up the way he is presented, one must be curious what the music is like behind this epic and riddle-filled artwork. Without warning, the album explodes with the hypnotic insanity and non-stop hellish vocals of "Prima Mobilae", you can't help but feel dragged down into an ever-opening black vortex of madness. An album opener could not be more insane and exquisite than this. Straight to the anthemic "As the Stars Watched the Birth of Eternity" to the skull crushing doom of "The Third Thought From the Sun", the guys show that they are back with full cylinders and also haven't lost the heaviness and unique touch that was so well presented on their EP. After the short and haunting choir track "Sapiens Formulae" which feels like a calm break before the album's fastest song "Through Eyes of the Omnipresent" is unleashed with raging fury and hits you in the head for four minutes. The following song "Forgotten Deity" clocks at eight minutes and is the album's longest track. It shows the band's skills to write varied and well-written songs with many different melodic passages and tempo changes without losing its point and catchiness. "Forgotten Deity" has everything and represents the true passion this band has for different styles of extreme metal, a true adventurous and epic song with a beautiful ending. The following song, "Gorakaathuar" reminds me of those old Teutonic black/thrash bands, a really cool and crushing tune with the ending chorus that follow you days after hearing the song. "In Wrath Enshrouded" is a perfect album closer, four minutes of intense black/death/thrash madness that will leave you beaten and breathless in the dust the album has left you.

It's hard to put Third Storm in one category, and that's a good thing. Black/death/doom/thrash, all blended together, the variety throughout the album is well-crafted and there's everything for everyone who love extreme metal here; brutality, heaviness, speed, melodies, chaos, doomy stuff, blast beats etc, and everything is excellently done in its pure blackest form, and with a very raw but crispy wall of sound at the same time, and all the songs stand out and are actually very catchy. The Grand Manifestation is also a concept album and part one of a trilogy. You have to read the complex but interesting story itself (included in the booklet along with the lyrics) in order to grasp it fully. An existential and philosophical journey with lots of metaphors and symbols that can only come out of Heval's imaginative mind. The ending is a cliffhanger, so hopefully the guys hurry up with the next album.