The Arteries of Heresy 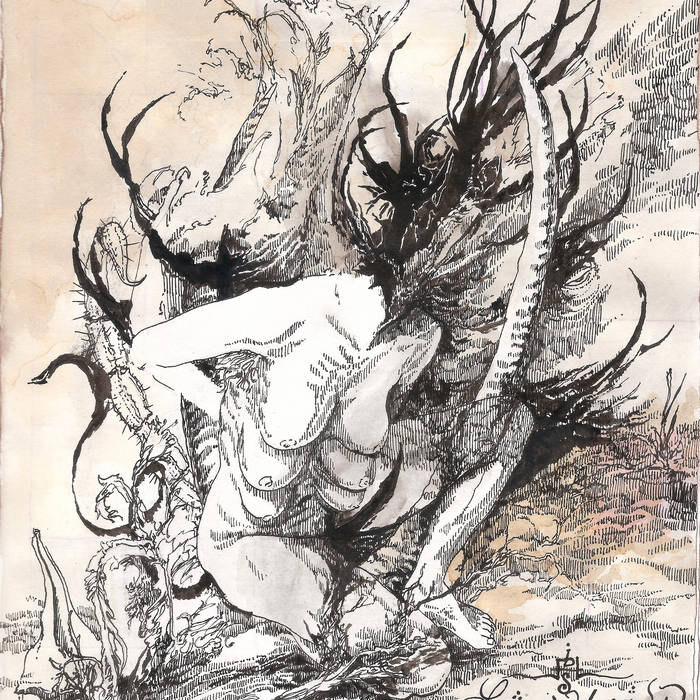 Mohemian This is some really mean stuff. Devouring Star from Finland have mastered a Black Metal style which is both cold and misanthropic, crushing and yet elevating at the same time. Their pendulum is constantly swinging between almost sludgy parts and omnicidal blast beats. Together with the outstanding artwork it will leave your mangled corpse frightened and frozen in time. Favorite track: Scar Inscriptions.

AbsoluteHatred I found this album to evoke a very disturbing feeling in my being! This is true art!

Ippocalyptica I am a huge fan of Devouring Star’s debut album, Through Lung and Heart, which I found to be a great entry in the Deathspell Omega-inspired field of dissonant black metal albums. There is a haunting, droning aspect to that album that is matched by few others, and the ferocious blasting portions of those songs put up an otherworldly and very cold wall of noise that simultaneously flattens and envelops all that stand in Devouring Star’s path. The Arteries of Heresy is similar to the debut overall, with the key difference being that these songs have more distinct identities than anything on Through Lung and Heart, whereas the debut album feels like one continuous track. For this reason, I consider Through Lung and Heart the more immersive experience, but I believe that The Arteries of Heresy contains the band’s individually strongest songs in Sin Assimilation and Her Divine Arteries. Devouring Star is evolving, and I cannot wait to see what the band releases next. Favorite track: 5. Her Divine Arteries.

Matthew Toye Devouring Star are back with more of their patented world eating black metal. They may be Finland's answer to Deathspell Omega, but they tend to sound like the cold emptiness of space instead of chaos and dissonance. Favorite track: 5. Her Divine Arteries.

"Devouring Star has shown considerable evolution in its sound from their nascent demo release, and I urge everyone to check it out if you want to hear a fresh and disturbing new take on black metal." - No Clean Singing

Finland's Devouring Star strike once again with their pitch-black sophomore album, "The Arteries of Heresy". A follow up to their acclaimed debut "Through Lung and Heart" (2015), "The Arteries of Heresy" see the Finnish band bolder than ever before, as they venture further into the depths to expand on their signature sound of crushing black metal.

Each of the 5 tracks on "The Arteries of Heresy" see the band expertly command chaos and sonic violence: the cold and calculated opener "Consummation" threatens the listener with imminent dread, before "Sin Assimilation" unleashes an onslaught of unforgiving molten steel.

"The Arteries of Heresy" is bound to be one of 2018's most unforgiving and uncompromising black metal records, and cements Devouring Star as on of Finland's best kept secrets in extreme music.