by Oath of Cruelty 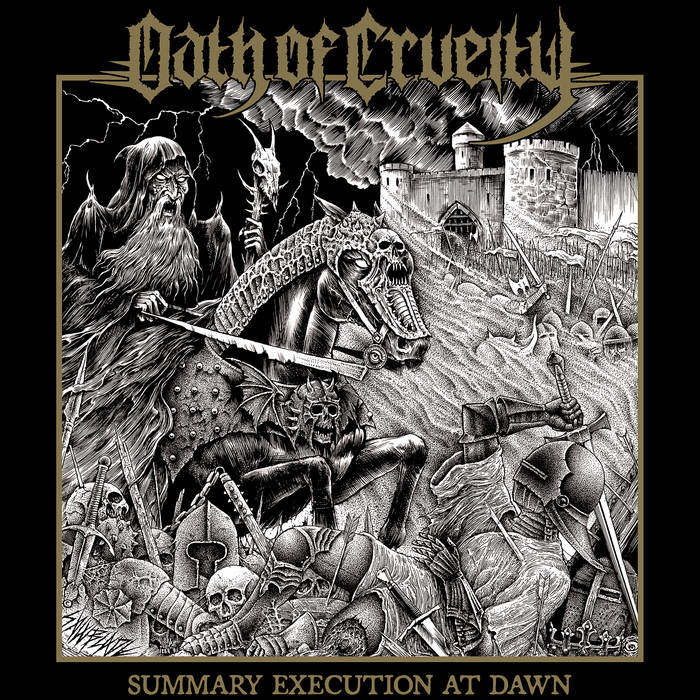 Thrash Till Death 555 (David) This is how death/thrash is supposed to sound! channeling the greatness of bands like demolition hammer, morbid saint, and merciless. \m/

Televiper This is some precision riffing. Lots of modern Thrash forgets the riff and focuses solely on the jet fuel but Oath Of Cruelty dial the velocity back a bit and send forth the neck-snappers. Vicious and incisive, goes toe-to-toe with the scene’s best. Favorite track: Pathogenic Winds of Swarm.

MaDdMuNk Blayne Smith from Banger recommended this on his Metal Monthly Youtube video for December. I heard the riff for Stabbing Forth With Invincible Damnation and I had to buy this album!

“When the band first started, and names were being considered, I felt
that Oath of Cruelty had the right "texture" and connotations you
know? Sadism, medieval violence, torture... It just fits.” Dave Callier
just hit the nail on the head. Frantic, barbaric, yet sharp as a knife…
Those are just some of the words most associated Houston’s Oath of
Cruelty.

The band was initially formed in 2010 by Matt ‘Mayhem’ Heffner on
drums, Dave Callier on guitar and Kyle Laven (R.I.P.) on lead guitar,
and their first demo Altar of Impalement was recorded in 2012 with
Robert Mena from local 80s thrash moguls Dark Reign on vocals.
After few line-up changes (incl. the arrival of Imprecation’s Danny
Hiller on guitar, and of Tony Rich from Houston'ss Necrotic Void, who had a 2-year stint in the band) plus a second demo and a two track EP, the core trio of Callier, Mayhem and Hiller have finally recorded their first proper full-length and sealed a pact (in blood) with Dark Descent Records to release it.

Dave describes Summary Execution at Dawn as a “culmination of
spastic, frenetic riffs and urgent blasting energy, punctuated by
sadistic, harsh lyrics delivered via barbarous, grating vocals.” Their
songs are about sadism, medieval scenes of violence and carnage, the senseless nature of war, the Black Plague, idiot religions, and the
industrialization of war and weaponry. No wonder then that they’ve
covered Merciless classic from their The Awakening album ‘Denied
Birth’ and that most of their influences seem to come not only from
the 80’s but from the then bleak industrial-like German birth place of
Sodom and Kreator. “With the exception of Slayer, I always felt like
80’s German thrash metal was much more deathly and abrasive,
which speaks more to us. Pleasure to Kill, Riders of Doom – there
aren't many US bands that have records worth comparing to these! I
have to confess though that it's important not to understate the effect Repulsion has always had on me... Most of their really classic songs are just thrash metal riffs played at 45 RPM. Total death!”

All three musicians - Spencer from Blaspherian joined them on bass
after the recording - may have roots in grindcore (PLF), war metal
(Morbosidad) and evil death metal (Blaspherian) yet Summary
Execution at Dawn lives in its own time frame. With some songs
harking back as far as 2010 and a recording slowly chipped away at
since 2015, the result is 34 minutes of death/thrash executed at
rabid speed, set in medieval times when “life was cheap” and tyrants
and cruel wizards ruled the earth. In the sign of evil indeed!

MF DOOM is given his flowers, plus appearances from MC Jada Imani and Stanley Ipkuss