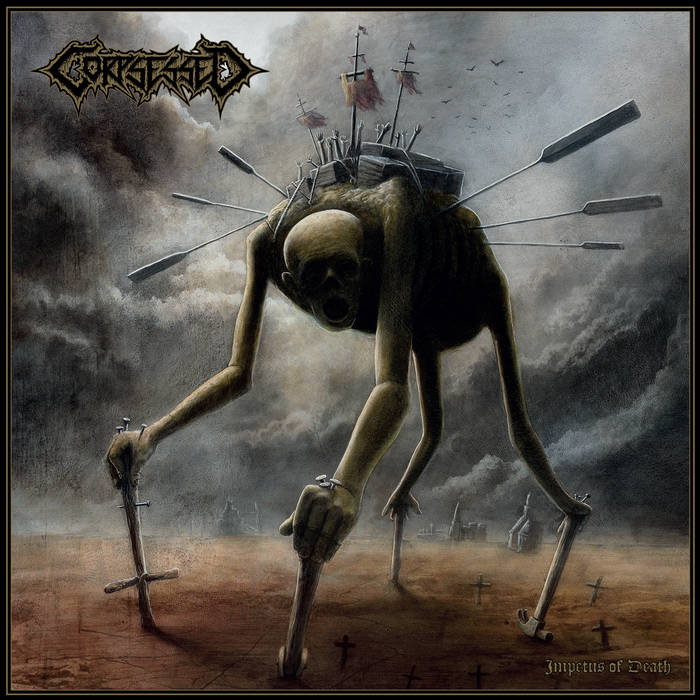 TheKenWord2017 Full of crushing riffs and cavernous atmosphere, Impetus of Death proves a worthy addition to the ridiculous overpopulation of quality death metal we have seen in 2018. Favorite track: Graveborne.
more...

Many things have changed since the 2014 release of the band's acclaimed first full-length album, Abysmal Thresholds. Main composer and guitarist Matti Mäkelä finally found some time to resurrect his funeral doom project TYRANNY and release one crusher of an album (also on Dark Descent) in 2015. A year later, CORPSESSED found a new bassist in Tuomas Kulmala (LIE IN RUINS and PERDITION WINDS). And over the course of four long years, CORPSESSED completed their second full-length Impetus of Death, an album that manages to top it its predecessor in terms of heaviness and brutality while taking their epic sound a step further.

"We've never been that fast composers" admits Mäkelä. "But the atmosphere must be there, the riffs must be killer and everything has to be top notch. Plus, we knew we needed to raise the bar this time. So all the band members contributed and we had three separate demo sessions of almost all the songs. It was quite time consuming but invaluable while thinking of the big picture, even more, so we've once again recorded the album ourselves."

The recordings took place from November 2017 to February 2018 in their rehearsal place, with extra help from their label-mates LIE IN RUINS and DESOLATE SHRINE, Dan Lowndes from Resonance Sound Studio took care of the mastering last April.

The album's title was inspired by the impression that, indeed, it is "death itself that sets things in motion, be it the fear or lurking presence of your own demise, or the death of a loved one. It can be seen as a force that moves us and sets a timeline for our very existence. This you can view as either something very grim and nihilistic, or on the contrary, the very thing that gives your life a meaning or the power to do anything. To create you must also destroy - 'solve et coagula' right? - where death gives birth to something new.... This is life, and death is an essential part of it. And the music we play, is DEATH METAL so what's more fitting than this?"

Impetus of Death is completed by a fitting and disturbing artwork by Mattias Frisk from VANHELGD whom Matti met in 2015 in Copenhagen while playing the 'Heavy Days in Doom Town' fest with PROFETUS.

"We told him to do what he felt would fit the music, but devoid of the usual clichés like mystic figures in robes, goat-headed priests and nude girls on altars," recalls Mäkelä. "We also wanted it to be in colors this time around as all our previous covers were in black and white."

Simply put, the second full-length from CORPSESSED is brutal; although it doesn't feel the need to break the 250 BPM barrier to show how tough it is. Still rooted in the classic sound of the early 90's yet with its own doomy touch, it's really Impetus of Death's uncanny ability to bring forth a quite unique form of creepiness, almost cinematic in places and quite claustrophobic that sets them apart. As Matti puts it best, "What can I say? We like to keep things evil and ominous."

Guest vocals on "Endless Plains of Dust" by K.Kankaanpaa